Each day provides its own gifts. ~ Marcus Aurelius


One day when I was in my early teens, I was rummaging through my mother’s junk drawer in our dining room and came across a paperback book, Anne Morrow Lindbergh’s Gifts From the Sea. Although my mother read magazines, I don’t think I ever saw her read a book. This paperback had probably been a gift to her. Even if my mother never read it, she communicated to us that her family was her greatest gift. I read Lindbergh’s book in the bathroom as I reneged on my dish drying duties, leaving my sister to take up the slack. As I read about the sea gifts, I was touched by the gentleness, the immediacy of the moment, and the connections that remain with me nearly 60 years later. I suppose this book was an inspiration lying dormant in my mind until I turned 70.

Over the years, I’ve had many elderly role models, people who have shown me that aging is not a death sentence for the spirit. Most of these people do not know that they’ve been an inspiration for me; in fact, many do not even know me.

Recently I read a blog by a man in his late 80’s who has Parkinson’s. Although he struggles, he remains engaged with life as much as he is physically and mentally able to do so. In one of his blogs, he shared a story about his friend’s mother, Margaret, who turned 97 last August, and included a video of her reciting a poem she wrote: *

A day is like a pretty gift. You open it with care,
you spread it out, examine it, decide just how you dare
to make the very most of it, what pleasure and what use
you plan to keep it fresh and  nice, not marred with abuse.
And when you’ve worn it to a thread,
you’ll pack and store away to keep with all the others
your gift of one more day.

Margaret is an inspiration, along with some of the octogenarians and nonagenarians in my monthly poetry group.  And there are also some of my relatives who have shown that in later years, one can be creative, funny, courageous, wise and connected. As the calendar pages turn, some amazing older people have reinforced what I believe—that it is important to keep an open mind about possibilities: an Australian woman, Olive Riley, was blogging at age 107; John Glenn at age 77 boarded a U.S. Space Shuttle; Grandma Moses took up painting at 78.

When I turned 30, I jumped out of an airplane. Forty years later when I turned 70, I leapt into a new decade. So much of life is about attitude. Jumping from the plane was about proving to myself that I could and it has made a difference in providing a new perspective and confidence. My reflections each day have also made a difference in my perspective. I consciously made a choice about how I would face each day—I would live each day deliberately.

The idea for this project evolved slowly as my father was dying from Parkinson's in 2014. I started my 365 Gifts a week after his death. He had often asked, “Why is God letting me live this long? I’m ready to go.” Some days I, too, silently asked this question. What was the purpose of his struggle and pain? There was little joy in his days and it was painful for our family to witness this. One of his caregivers wrote on Facebook a year after his death that he had made her a better person. Even in his impaired state, he had an effect on people who believe that he was their gift.

When I started this 365 project, I intended it to be just for me, a year where I would find good in each day, no matter what. I would write daily about gifts and illustrate with my photos. However, as I began, I decided to share it as a blog, even though I doubted anyone else would be interested. As it turns out, I had regular readers. Some posted "likes" and comments on Facebook or my blog while others have told me personally how much they enjoyed reading about my gifts and that my posts were a gift to them. They have said how much they will miss my blogs and one reader is considering doing the same thing herself.

As my 70st birthday approached, I was sure that I did not want age to define my reality. I would make my reality about how I lived each day. I wanted to create something concrete that would help me maintain balance. This was not always easy but I never doubted my ability to complete it.

As I look back at my writing during the past year, I often acknowledge the past but I always embrace the present. It becomes obvious that certain themes dominate—nature, friends, family, art. Throughout my writing, there has been a blending of the past with the present, a coalescing of the senses and introspection and a positive philosophy of moving forward.  Although I will not be writing about the 365 days I live as a 71-year-old, I will certainly continue to feel gratitude every day.

Knowledge of my own certain mortality is a gift to me that marks each day as precious.


Each morning we are born again.  What we do today is what matters most. ~ Buddha 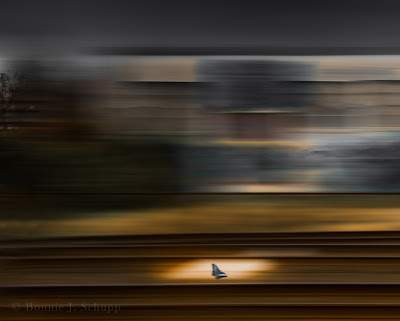 As the train moved, I put my camera up to the window and clicked a blur. On this last day of my 365 Gifts project, the year seems to have whizzed by like the scene outside this train. Maybe this whirl of time is why I decided to pause and look at each day deliberately.

My friend Karen and I were on the way to Washington, D.C. with no special plans except to be open to the moment. After seeing a sidewalk sign for an IMAX movie, we wandered into the Smithsonian National Museum of Natural History and bought tickets for the next movie. Seated in the second row, we watched a group of fifth-grade boys in front of us as they leaned back and perched their feet on the railing. The Jean-Michel Cousteau’s Secret Ocean 3D movie began and the boys, with toes pointed upward, stretched their hands upward also, trying to touch the fish that appeared to be reachable with the 3D glasses. As in life, some things you can see only with special glasses and some things you can touch only with the glasses off. With the excellent photography, narration, music and child wonder in front of us, we too felt the child in ourselves.

Later we wandered to the Butterfly Pavilion where butterflies fluttered around us. We learned that a butterfly’s lifespan can be from one to three weeks.  These amazing creatures dotting the space around us exuded magic. I have lived for 3,692 weeks and experienced 3,689 more weeks than these butterflies. If they can live in the moment and bring joy to others, I think that with my longer lifespan, I can certainly find a spot of joy each day and share with others.

In my blurred train photo, there is a small spot of light—a blink in a day, a week, a year or a lifetime.

My gift today is a year of bright spots. 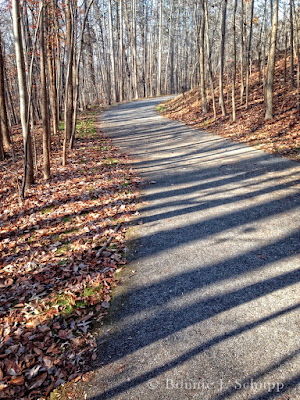 Paths, a hackneyed cliché for personal journeys and choices, is on my mind today and I will not apologize for adding to its overuse.

As I walked with my friend Brycia this morning, I thought about how our paths crossed through photography and how I admire her resilience. Like Robert Frost’s two roads, her road has changed direction recently and it will make all the difference.As with all my friends, time spent with Brycia adds new layers to my life. I think about my own paths and am grateful where they have led me.

If we listen to political pundits today, we begin to realize that too many people believe their way is the only way.


It's one thing to feel that you are on the right path, but it's another to think yours is the only path.” ~ Paulo Coelho

Instead of rejoicing in the beautiful patterns in front of them, some walkers fear the shadows that stretch across their paths. There are those who fear walkers on other paths and it is this fear that creates bad choices.

When we were born, choices were made for us. Does the path change us? Of course. But as we become full-fledged adults, we have the power to walk another path. What may be most important is how we respond to other travelers at the intersections. Not only are we responsible for our own happiness but also for ripples we leave in our wake.

Today I gave Brycia my homemade split pea soup and she sent me on my way with her homemade Rice Krispy treats. We gave one another hugs.

My gift today is a  path of  friendship.