For me, an American, Pakistan was a remote country that held little interest until 1984 when our daughter, Lauren, entered kindergarten at then Gibson Island Country School.  As a precocious child, she began a year early and landed in a “little United Nations” class of around 18. Countries represented in her class were the United States, Korea, Great Britain, Turkey and Pakistan.  At age four, Lauren was the smallest in her kindergarten class and Ami, from Pakistan, was the largest. He was a nice kid who was generally on the quiet side, a giant teddy bear.  At that age, close friends were those of the same gender so I did not get to know Ami very well. I remember his mother, Salma, always smiling and friendly, wearing a sari to a special event at the school. It was a good education in many ways during Lauren's K-5 education.

The only time I thought about Pakistan after that was when it was mentioned in the news, often in a negative light. Then in spring of 2013, my husband David and I received a call from Maryland's World Trade Center Institute in Baltimore asking if we would host a Pakistani teacher. Although it was not a convenient time for us to have a visitor, we said yes and opened our home to Farhan Rafi, who teaches English to teenage boys. Farhan’s English is excellent.

For a brief two days, amid our myriad of scheduled activities, we learned a little about Pakistan and Farhan learned a lot about an eccentric American family. We have kept in touch via Facebook, and have Skyped with him and his students at the Access English Microscholarship Program in their city of Multan.

David and I have also become Facebook friends with some of his students, although the time difference between the countries and our busy schedules do not work well for the instant chats that the students seem to crave.

Recently we learned sad news about one of Farhan’s young students, Abdul Muqeet. He is 15 and was seriously injured playing cricket with his school friends during a break.  After his friends took him to the school dispensary, a rescue team was called and then he was taken to the Nishtar Hospital Multan, where he underwent a critical and complicated spinal cord surgery. He is now at home, lying still in his bed, and his doctors estimate that his recovery will take at least six months.

Most of his treatment has been through donations from various sources. The three to four hundred dollars (American translation from rupees) for medication is an overwhelming burden on his middle class family. His father is a laborer, according to Farhan, who is trying to help the family deal with costs of treatment by asking for donations. He tells me that Abdul Muqeet is a very bright student who has learned English quite quickly and can speak it fluently. He is one of the more brilliant students in his school who is now lying in bed, unable to attend the classes he loves. It is touching that Abdul's teacher is trying to help his student like this. See below about how you can help.

Since this new connection with Pakistan and its people, I have become more curious about this country. Farhan told me that medical insurance is uncommon in his country. When I researched, here are some things I learned:

Pakistan, which has had status as a country only since 1947 when it separated from India, has a life expectancy of 65 while the life expectancy in the U.S. is 78. Median age in Pakistan is 22, while in the U.S. it is 37. The average annual income is around 420 US dollars and 35 percent of the population lives below the international poverty line. There are also problems with water pollution and limited natural fresh water resources. A large part of the population has no access to potable water.The literacy rate is 45.7 percent, so Abdul is way above average in his country.

I was startled to learn that 99.3% less money is spent on health care in Pakistan than here in the U.S. According to the World Health Organization, “per capita public and private health expenditures combined in Pakistan are 7 USD while the United States spends 6,719 USD."


How You Can Help

Health insurance is not the norm in Pakistan. You can send checks made out to Farhan Rafi who will give all donations to Abdul's parents to help with expensive medical costs.

Check out the information below to get a better picture of how disparate living conditions can be. Farhan understands how important education is and he makes every effort to help his students succeed. 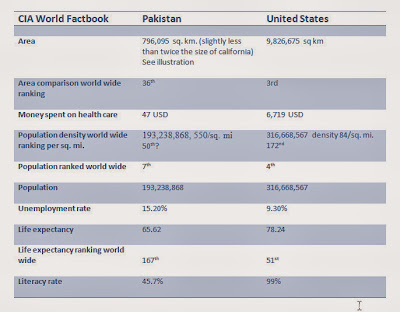 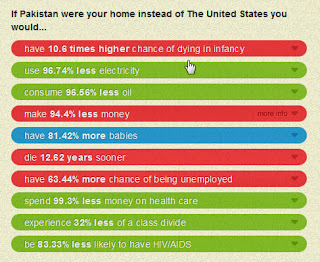 I have always advocated the importance of education, no matter who you are and where you live. That is why I became a teacher. I just finished reading I Am Malala by Malala Yousafzai who crusades for education for all and especially for Pakistani girls. If your local library does not have this book, you can find it here.  More about Malala on The Huffington Post.