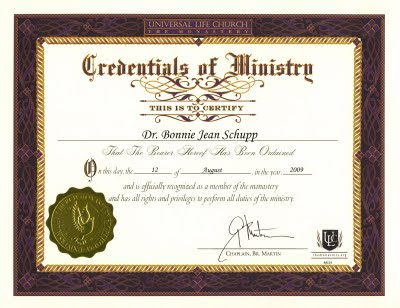 I can now perform weddings in the state of Maryland.

Contact me: schupp9 (at)
Posted by Bonnie Schupp No comments:

Color of Change is making an impact on the hate mongering of Glenn Beck. Large companies are now thinking twice about the negative advertising that results when their names are connected with someone who seeks to destroy. Beck may be crazy like a Fox in his rhetoric that leads his flock to look for "otherness" through lies, but he is still crazy. Read more here.
Posted by Bonnie Schupp No comments: 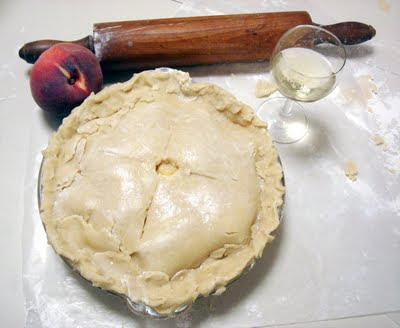 This is a picture of the pie before it went into the oven. David made the filling and I tackled the crust. I struggled with trying to keep it in one piece so I could get it into the pie dish but it wouldn't hold together.

Could it be because I left out 4 tablespoons of water when I mixed it? Could it be the wine that I sipped while making it?

It was delicious though!

Once upon a time, there was a retired couple. He had been an editor and retired from The Sun after 40 years. She had been a middle school teacher who earned a doctorate after retiring from teaching 7th graders.

The woman was a big water drinker. Waiters at their favorite Chinese restaurant, the Szechuan Cafe in Pasadena (Maryland), did a good job of keeping her water glass full but they had to work hard to do it. She had asthma and her doctor said she should try to drink a gallon of water every day. Her gastroenterologist also said she needed to drink loads of water.

When this couple went to see movie screenings, sometimes she bought a fountain Coke at the theater but other times she carried a small bottle of water from home with her. People at the movie theaters were all understanding so the water was never a problem...

This nice couple drove 34 miles from Pasadena (Maryland) to Bengies Drive-In to see another screening. They did not take a bag full of snacks. They did not stop at McDonald's on the way. They weren't hungry because they had just had dinner (chicken, rice and asparagus). They had no alcohol in their car. They came to see the movie. However, they did have two fresh bottles of water with them.

"Wait! You have to get rid of your water." A Bengies man shouted at them as they drove in and began to look around for a pull-in spot. He told them they had to throw away their fresh bottles of water and buy new bottles of water from the drive-in's concession stand. Management wouldn't budge.

So, rather than throw away two $.50 a bottle waters and buy two $1.25 a bottle waters, this couple left without seeing the movie. They drove home another 34 miles, spending $5 in gas in the end.

It was the principle.

They also kissed that night.

In case you're interested in the theater's House Rules, go here:

It's enough to scare off a nice retired senior couple and their blog readers.

The nice husband adds: An offer to buy two bottles of water from the concession stand, while keeping the two contraband bottles in the car unopened, was refused. The two perfectly good, unopened bottles of water, had to be thrown away, or we would EACH have to purchase a "food and beverage permit" for $7. So it was throw away 50 cents worth of water, pay $14 to keep and even drink that water, or leave the premises. We chose the latter. The great American drive-in movie theater has been vanishing from the landscape. Bengies may be the last in metro Baltimore. It has not had an easy time surviving. Inflexibility cost it all of $2.50 worth of water sales tonight, and the possibility of a hotdog sale or two during the screening.
Posted by Bonnie Schupp 3 comments:

I haven't met Stella yet but feel that I already know her because her Daddy and Mommy have been busy recording her life. When David and I go to Germany we'll get to meet her in person. Oh...and we'll also see Jeremy, Maja and Holly...her parents and her dog. If you want to smile and delight in the little things in life, visit The Bunny Rabbit Chronicles.
Posted by Bonnie Schupp No comments: