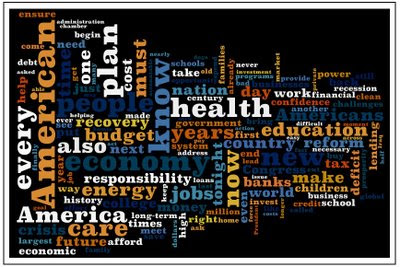 It’s hard to break old habits. George W. Bush was a great leader...when it came to division. Not exactly something to be proud of. Now the Republicans seem to be in a deep rut created by the habit of Republican politics...the habit of wearing blinders that allow only an us vs. them perspective.

Why are they against the stimulus bill? Have they even read it? Can they read? It seems not when you look at the claims they’re making about the bill. And when will they stop their lies?

Many claims of Democrats slipping in earmarks for frivolous projects aren't true.


Do some of the Republican claims you've heard about the stimulus bill sound too awful to be true? We find a few that are wildly exaggerated or downright false.

· It's not true that the bill contains spending for "golf carts." It has $300 million to buy fuel-efficient vehicles, some of which may be electric cart-like utility vehicles.

· Money claimed to be for "remodeled federal offices" is mostly designated for upgrading buildings to "green" status through such things as thicker insulation and highly efficient lighting, not new drapes or paneling.

· A widely repeated claim that $8 billion is set aside for a "levitating train" to is untrue. That total is for unspecified high-speed rail projects, and some of it may or may not end up going to a proposed 300-mph "maglev" train connecting , , with .

· There's no money in the bill specified for butterfly parks, Frisbee golf courses or water slides, despite a GOP congressman's claim that the bill "will fund" those projects. He culled those silly-sounding items from a list of 18,750 city projects that the Conference of Mayors cobbled together in January as examples of "shovel-ready" projects.

Let's hope that the President can pull the Republicans out of their rut.

(The picture at the top shows President Obama's speech tonight configured as a Word Cloud. )

HAPPY 29th ANNIVERSARY to us... David and Bonnie.
It doesn't seem that long. Really! 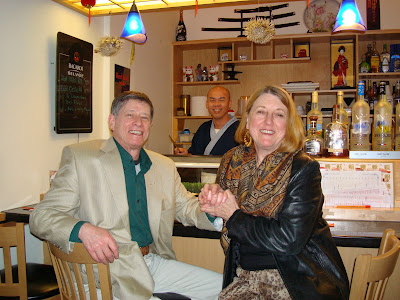 We had dinner at our favorite restaurant, the Szechuan Cafe. (Notice the sushi chef and his knife in the background.)
Posted by Bonnie Schupp No comments: