Running out of space

Money has never been in the forefront of what drives me. I am driven by curiosity, creativity and connections. Lately, however, I’ve been driven by letting go—letting go of stuff I’ve accumulated over 74 years. My house is bursting at the metaphorical seams and clutter has infringed on whatever sanity I may have left. Enough is enough.

I first noticed when I no longer had room in my closets, file cabinets, attic and garage. After all these years of more things coming in than going out, I had to act. My husband still keeps things piling up and what to do with it is up to him. But I could come up with a plan for my stuff. Some I would throw away; some I would give away; some I would sell. Once I took care of the first two methods, it was now time to see if other people thought my things were worth paying money for.

I had already tried eBay with limited success but I hated the time-consuming details of packing and shipping. So I decided to try a neighborhood site Next Door and Facebook Marketplace which limited posts to my area. People could come to my house with cash and relieve me of stuff that was swirling around my space and distracting me from focusing on my creative endeavors.

Running out of gears and inches

So...let’s start with the garage that had two bikes. I had had two bikes for years—one a 21-speed bike, my older daughter’s hand-me-down to me, and my 3-speed girls English bike from my childhood as a second-grader. It still worked but at 74, I needed all the gear help I could get. Three speeds were not enough any more. 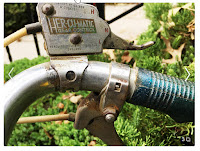 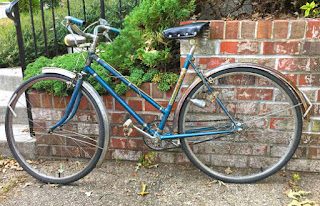 Ad as listed: Collectible. Antique. Shelby Travelers girls 3-speed English bike from 1950. My bike was manufactured in Birmingham, England. It has right squeeze style front brake and left squeeze style rear brake. Brakes work fine. It has a generator style headlight that works as long as the rear wheel is moving. The body definitely shows its age and badly needs cleaning. I've been riding this bike since 1950 until today when I thought it was time to get a new girls bike for my 74-year-old body. It has a new seat and the tires are about 2-3 years old. I cannot find a serial number. It works very well..smooth ride and good brakes! I was just riding it yesterday. Important when riding: Unlike modern bikes that require shift changes to be made while peddling, this old style must shift gears while coasting. It seems that both my bike and my aging body are showing signs of aging! $65 or make an offer...

It turns out that I no longer fit the one my older daughter gave to me. After losing 1 ½ inches in height and some agility in the aging process, I could no longer swing my leg over the middle bar unless I leaned against a wall. And then when I stopped, I had to have wall support in order to dismount safely. I traded it in for a 21-speed “step-through” bike that is understanding of my recent limited abilities.

Why was I still saving my rusted childhood bike? It was now time. I had to begin trading my sentimentality for space—and hopefully some cash.

The sale and rest of the story

I advertised on Facebook Marketplace after no success for pick-up only on eBay. It took several weeks but I eventually got a response from a man, Cory, who was interested. After arranging pick-up day and time, he showed up at my house with his wife. I opened my garage door so he could look at my antique to see if he still wanted it.

“This could be worth more than the $65 you are asking. Are you sure you still want to sell it?”

I assured him that I did. He said he would carefully refurbish it. Then he made another offer.

“I can see that you have a sentimental attachment to it so I want you to know that after I have refurbished it in a couple of weeks, if you change your mind and want it back, I’ll return it and you can return the $65 to me.” This man obviously loved restoring old things and understood how feelings mingle after many years. He loaded it into his car and I said goodbye to my old bike and hello to new space in the garage.

Not long after that, Cory sent me a message asking if I would like him to send photos documenting the restoration process of  my his bike. I said okay.

Then he began messaging me with dozens of photos as he disassembled the entire bike and thoroughly cleaned all the parts. I could see this man was an artist of sorts who cared about the project he was working on. When he had finished, he told me he planned on giving it to his daughter for Christmas and did I want to take a final ride on it? He wanted my final approval of the hours of work he had devoted to giving new life to my second-grade childhood bike. I went to his house, took a ride on it and gave him a thumbs up.


Just a few days after Christmas, he sent one more photo. My his his daughter’s bike, like new and painted green instead of the original blue, stood on a kickstand in the foreground. In the background, his grown daughter was hugging him.

Although I am not driven by money, in the end I did make some money. But I also learned about transformations, made a human connection with a "bike artist" and created some space. Not bad.