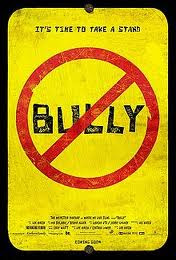 Power. Control. These words pierce our society and make it bleed.
In 1975, I read Against Our Will by Susan Brownmiller and was startled by her thesis that rape is not about sex as much as it is about power and control.
These words came to my mind as I watched a screening of the new documentary, Bully, by Lee Hirsch. Although I doubt anyone would equate bullying with rape, many elements overlap. Both the rape and bullying victim have no control, are not empowered, are humiliated and their dignity is stolen from them. A huge emotional toll results. Also there is a certain objectification in both situations where the perpetrators see the victims as an other. Empathy is missing.
Like many people, as a child I had some experience as a bullying victim. Somehow I was able to deal with the cruelty of other kids and to defuse situations. Later, as a teacher (read some personal experiences here) and parent (read about how I helped my daughter when a bully picked on her in kindergarten), I found it painful to observe children bullying other children. I questioned what was behind bullying and wondered if adults could help children avoid having these painful experiences. Then I began researching this problem as a doctoral candidate in Communications Design at the University of Baltimore. I believed that a lack of empathy played a role in the bullying problem and focused on this in my research.
When I attended the screening, I was most interested in what might have changed from 2000-2005 when I was researching and today, 2012. From what I could see in the film, not much has changed.


The documentary follows several bullies and their families and does a good job of showing the pain they feel. The community suffers as well. It also dramatically shows how clueless educators can be, especially when a principal forces a victim to shake hands with the bully, then dismisses the bully and treats the victim as if he were responsible. (My experience with insensitivity of educators.)

In following the people in the film...bullies, families, communities, schools in three states...the movie’s transitions and continuity make it difficult for the viewer to sort out all the players. As it jumps around, it is easy to confuse all the relationships.
I was expecting more clarity about the dynamics involved in bullying and, more important, the solutions. Viewers feel sorry for the victims but we do not learn enough from observing them. The film definitely offers awareness but it provides very little beyond that.
Roger Ebert makes a good observation in his review: “My notion is that a fiction film might be more effective than a documentary. It could encourage young viewers to identify with victims of bullying and to dislike bullies. Movies that encourage empathy are more effective than those that objectify problems. Some kids will think: ‘I’m not like those losers.’ The right kind of fictional story might make that harder to do.”
Bullying is direct or indirect intentional behavior that involves an imbalance of power and is usually repeated over time. Most people see bullying as direct physical action such as hitting and punching and for too many years, adults have accepted that children will be children and that bullying is a rite of passage that everyone goes through. However, it is the indirect bullying such as ostracism and spreading rumors that often is the most painful. Humiliation to a bullying victim can seem on par with rape. 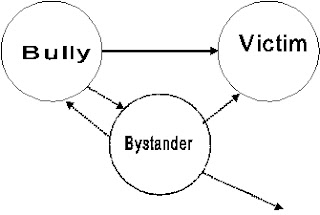 How do we deal with this problem? Certainly not like the principal in the movie. Solutions must come from several layers. Bullying involves the bully, victim and bystanders. All three parts of this dynamic must be addressed. Yes, awareness through a documentary such as this is a beginning but it goes much deeper. From the top down, educators must be trained. Adults need to take responsibility, not turn their heads, and provide a safe environment for all children. From the bottom up, bystanders must be encouraged to play a positive role in stopping the bullying they see. Victims must feel they can count on adults to help them. And bullies must be held accountable for their cruel behavior.
In all of our human connections, day-to-day and in the media, we need to teach the appreciation of diversity and acceptance of those who are different. Teaching Tolerance is a great resource.
Children need to learn empathy and the best place to learn is at home. When I was a child, I remember dinner conversations at the table. Often my parents would ask my sisters and me, “How do you think so-and-so felt when that happened?” We were constantly asked to step into someone else’s shoes and to imagine how they felt.
Teachers have opportunities every day to teach empathy. From experience, I know this does not work as a special unit that homeroom teachers present to their homerooms. It must be a natural part of every day, through curriculum incorporation and through example. As a middle school language arts teacher, I incorporated empathy training in my lessons whenever I could. I would ask students to role-play based on characters in a story. I would ask students to write sympathetically about a character they hated. I did not tolerate certain language such as, “That’s gay,” or “He’s a fag." I would speak frankly with them about my perspective as a human being trying to do my job.
Adults cannot continue to shrug their shoulders and act insensitively. We must teach children tolerance and empathy as well as model these attitudes for them...every day, whenever we can.  The change from within ourselves will gradually ripple outward.