David Simon on David Ettlin at the Baltimore Sun

I took this photo in the 80's of my husband, David Ettlin, at work at The Sun. Well..."at work" is used loosely here. As I remember, he was reading the City Paper in this shot. This was taken in his smoking days, before our daughters asked him to stop because "Daddy, we don't want you to die." He has since stopped except for 2 or 3 a year that he bums from others. Other than that, he's been good.

As it turns out, this photo fits perfectly with David Simon's recent article about my husband's days at The Sun in the Sunday Sun Magazine special 175th anniversary issue. I smiled as I read it. It shows what a character my David is but it also shows that he was good at his job (which I always knew). Obviously David Simon thinks so and his praise carries a lot of weight. Simon's projects have included Homicide, The Corner, The Wire and, most recently, Treme. It is also obvious that David Simon is overflowing with talent.

I've always been proud of my David (and the other David too) and it's nice to see this recognition that he deserves.

I love you, David!
Posted by Bonnie Schupp 1 comment:

Infidel and a Western Historical Perspective 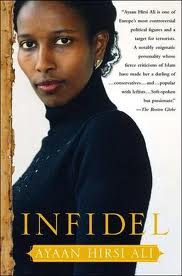 I just finished reading Infidel and Nomad by Ayaan Hirsi Ali. As someone who has believed strongly in diversity and the strength of multi-culturalism, her ideas shake things up for me as a liberal. She was a Muslim Somalian who escaped an arranged marriage and who now lives in the U.S. Now she adamantly writes about the dangers of the mindset of the Muslim religion.

This I need to consider further, but while reading her memoirs, I thought about the role of women as I was growing up and how some elements are similar.

As I read details of her childhood, I was appalled at the everyday violence she experienced and the degradation she was made to feel as a female.  No child should have to experience what she did.

Although it is definitely no comparison to her extreme experiences, I grew up in a time when our culture in the United States did not consider women equal to men.

Hirsi Ali writes about female circumcision that she experienced and how important female purity was to the honor of a girl’s family. Once a girl reached puberty, she was guarded like a hawk. Of course, nothing as brutal as circumcision was present in my world, but I understand the essence of what she was saying because of my western experience growing up.
Once I reached puberty, my mother stressed that I was not to be alone with someone of the opposite sex…even when I was in college. (We once had a huge family crisis because I didn’t obey this rule.)  In those days, expectations for girls were different from boys. I remember when I was 10 and told my parents that I wanted to be a doctor—a brain surgeon. (At that time I was into reading all the medical articles in Readers Digest.) My parents sat down and talked with me seriously about how girls did not become doctors but nurses instead. Then, they suggested, maybe as a nurse I might see too much blood so maybe I should consider becoming a teacher or a secretary. Whether or not I went to college was okay with them. They would be proud of me either way.
College and Career

I had no intention of becoming a secretary but am glad I became a teacher. It really suited me better than a medical career.  (My parents were right but for the wrong reasons.) When it came time to choose a college, I decided to go far enough away that I would have to stay in a dorm. My parents tried to talk me into commuting…even offering to buy me a used car. Even then, I knew that my college education would involve more than academic classes and instinctively I knew I needed to go away to college.

I wound up going to Frostburg where, at that time of a teaching shortage in the state, I would have free tuition if I signed a contract to teach in Maryland for two years after I graduated. No problem.  Students today might have a problem understanding this but in those days, female students were treated differently from male students. The day I arrived at Frostburg, there was a special assembly for students and their parents. Dr. Hardesty, the president of Frostburg at the time and a buffoon as far as I was concerned, assured parents that the college would take good care of their daughters while they were away from home. His advice to students was, “Cling to your professors.” Although he wasn’t speaking literally, some of the girls wound up doing it literally.

And so on. Being rather sheltered, my parents checked off “no” for all items but that didn’t matter because I found ways to do what I wanted anyway…and not be caught.

Some students today might be surprised that dorms then were segregated and boys were not allowed at all in girls’ rooms. Even more surprising is that girls had curfews and boys did not. Boys were allowed to live off campus but girls had to have a female “house mother.” In Infidel and Nomad, Hirsi Ali writes about how Muslim women must cover themselves for fear of sexually tempting men who might see any skin. When I was growing up, of course things were nowhere near extreme. However, girls were constantly reminded by their mothers of how to act as “young ladies.”  At Frostburg, girls were held to a dress code (but not the boys).  In my college days, students had meal tickets and ate in a dining hall. Girls could not wear pants but had to wear skirts for their college dining experience.

As a young girl, for my birthday and Christmas I usually got one gift that was an item for my “hope chest.” My hope chest was filled with a silver service, one fork, spoon or knife at a time. The “hope” was that I would find someone to marry me. Hirsi Ali writes about young Muslim girls being promised to older men—marriages that fathers arranged for. The men paid with goats, etc. and walked away with the promised goods… young wives who would bear many children, be at their command and tolerate new wives that they might marry.

I remember not long ago, weddings where fathers walked their daughters down the aisle. The minister asked who was “giving away” the bride. The father then turned the bride over to the groom.  The vows involved the bride saying that she would “love, honor and obey” her husband. At one time, the groom did not repeat these words but I think things may have changed now. However, it was the bride who always gave up her name, her identity, and took on her husband’s name. There was never any question about doing this. Today, even though things are changing, most women give up their names and take on their husband’s last name.

In the past, in marriage the woman was expected to fill certain roles while the man would fill his expected roles. My first husband once gave me for my birthday, ten coupons for washing the dishes for the next year! Gradually things are changing in this area.

Hirsi Ali writes about the disgrace a family felt if a daughter was not married and how dangerous it might be if she were raped. She says there are still “mercy killings” every day in the world because someone’s daughter was raped. The woman is killed…not the man! It’s her fault if a man rapes her!
To a lesser extent, this attitude exists in the U.S. where  prostitution is illegal. When someone is arrested in a prostitution bust, it is the woman and not the man who is arrested. Even today.

Later in my life, when I decided to leave teaching and (unsuccessfully) look for a photography position,  one man told me in an interview, “There are some jobs I just wouldn’t send a girl on.” I knew that was not the place for me to work. When I eventually opened a camera shop with a partner, I experienced lowered expectations of my expertise even from female patrons.*

Thank goodness, our culture has changed. I didn’t change my last name the second time around. Our daughter had a hyphenated last name. My second husband of 32 years and I are equal partners who fill not the expected roles but the roles that suit each of us best.

It is sad that there are so many Muslim women in the world, some in the U.S., are subjected to the rule of their husbands and who feel they must cover their bodies so men won’t be tempted. What about men taking responsibility for their own behavior? Haven’t we heard in the U.S. that some rapes are the fault of the woman because of the way she dressed? “She was asking for it.” Shouldn’t men behave themselves regardless?

We might view the Muslim perspective as extreme but some of the same elements, in milder form, are also part of our culture. We have come a long way in our western world but we still have a way to go…we have not elected a female President yet.

* I used to own a camera shop and, until I was able to hire some part-time employees, I was the only staff in the store. One day a woman walked in with a camera in her hand. I stood at the counter, ready to wait on her. She stood on the other side, ignoring me and looking toward the back of the store. I finally asked her, "May I help you?" She replied that she was hoping "the man" was in. It seems she had a problem with her camera and had assumed that only a man could help her. (By the way, I wound up fixing her camera which required a simple adjustment.)